It’s more important than ever that every American should have access to a stable and dignified retirement. According to the National Institute on Retirement Security (NIRS), 67% of Americans say the country faces a retirement security crisis.

However, defined-benefit (DB) plans can counter this plight because they produce the strongest pathway for workers to earn a secure retirement.

There are several differences between DB plans and defined-contribution (DC) plans like 401(k)s. One of the most significant is that a DB plan provides a certain amount of retirement income for participants. This is because DB plans are based on a clear formula that can include an employee’s years of service, final average salary, and a benefit multiplier (calculated as a percentage to help determine the size of one’s monthly benefit). With this formula, retired public employees earn a modest yet steady source of income, which makes it easier to budget for everyday expenses like groceries, healthcare, housing, and transportation.

Another reason DB plans are able to provide a dedicated benefit is that financial professionals with years of experience manage their investments, ensuring they obtain optimal returns over time. Reputable research shows that public plans’ investment performance has generated a majority of their revenue: the National Association of State Retirement Administrators (NASRA) found that investment earnings have accounted for 61% of DB plans’ revenue since 1990.

A further key distinction between 401(k)s and pensions is that participants in a pension plan do not have to shoulder the risks of the financial markets by themselves. Instead, pensions collectively pool risk among members, and they are specifically designed to be invested for the long term. Because of these factors, workers’ retirement savings are less susceptible to economic downturns. With a 401(k), an employee could lose most of their savings if the nation experiences a recession.

Last, but not least, research from NIRS illustrates that DC plans operate with higher fees as a percentage of payroll than DB plans. Because DC plans include less balanced investment portfolios and a lack of risk pooling among participants, they come with a higher cost to implement. Because of these factors, pensions “can deliver nearly double the retirement benefits at the same cost as compared to a 401(k)-style defined contribution plan,” ensuring that workers are guaranteed more retirement security. 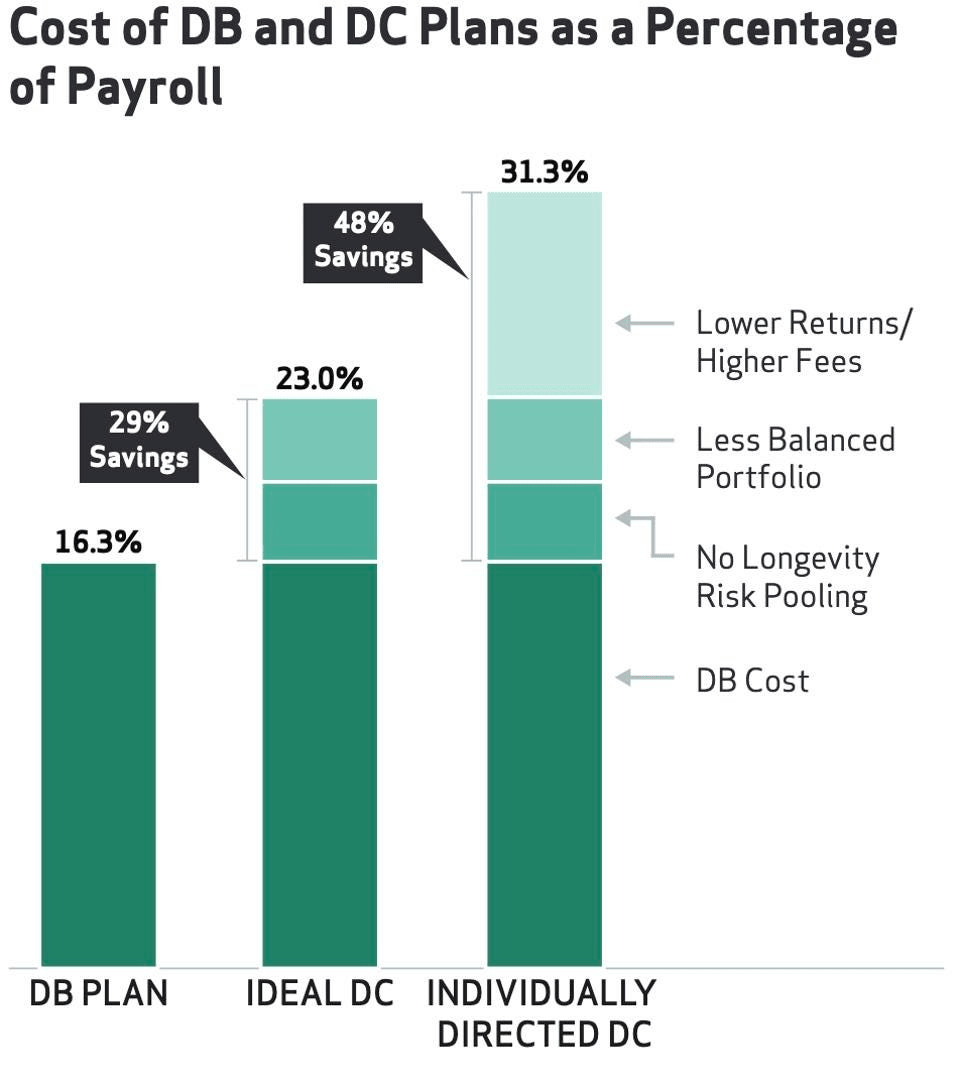 While DB pensions are less prevalent in the private sector, thankfully 86% of state and local government employees in 2018 still had access to a DB plan. Their pensions should be protected in order for them to retire with the dignity and security they deserve after devoting their careers in service to our communities.